Caemon has been inspiring me to create since before he was born. I have been writing about him his whole existence, painting little things for him, even making up songs. The heart-swelling love a parent feels for a child has a way of doing this over and over when we let it, and sentimentalist that I am, I often let it. It’s no surprise to me that some of the best writing of my life has come from my love for him and my losing him. My golden-haired boy with his Pacific Ocean eyes have been and forever will be a great source of inspiration.

Why it would surprise me that others are similarly inspired by my boy to create I do not know, but the fact is, in introducing my boy to the world, some of that world has gone on to remember him in their own beautiful ways.

It really started before he died. The youngest artists, my son’s peers, regularly drew and painted for him while he was sick. They drew him, and they drew things they thought he would like, and his drawings decorated his walls. Nurses, friends, supporters all created for him too. One nurse made brilliant caricatures; another made crocodiles on sticks. It was so touching when we would awake in his hospital room to find new treasures made for our sweet little boy.

In the hospital, Caemon found his own creative streak, once or twice deciding to use the easel and paints in the playroom instead of going straight to medical play. With little patience for realism, Caemon preferred to create in squiggles and lines, circles and spots. We still have his treasures around our home, the most priceless pieces in our art collection.

But the work that others have created in his honor is endlessly touching. There are a few pieces in particular that stand out to us though.

When Caemon died, we needed a vessel for his cremains. We didn’t want to buy something generic. We didn’t want a traditional urn. Instead, we wanted something that he would like, and so, we put the call out, and a friend of a friend came forward and offered to make him a small box. She came to our home just a few days after he died, and she talked with us about him, about what he liked, what his aesthetic preferences were (and, yes, our three-year-old had his very own aesthetic). She spent time with his things, sat in his seat at our big farm table, and she just felt him. 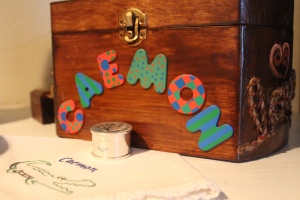 The day before his memorial, the same day we picked up our son’s ashes from the funeral home, she  brought us the box. It was whimsical, sweet, and so very Caemon with his name spelled out in blue, green, and orange letters on the front, words like “dance,” “laugh,” and “cook” written in different textures of rope on the sides and back with corresponding images of cooking pots and hearts, and then on the inside, a wooden blue butterfly—much like the Morpho butterfly—our boy’s soul transcended. And finally, on the bottom of the interior of the box, the word “Live” in wooden letters, along with two fantastic wooden teapots. Complete with a latch on the front (oh how he loved latches), this is a box our son would have treasured. When an error happened with the size of his bench plaque at the Oakland zoo, we were given the original, and so this now graces the top of his box, our own addition.  His is not a marble urn, not a solemn vessel; in fact—dare I say it?—I often smile when I look at his box. It contains my son’s ashes (well, most of them—other bits are scattered in forests and canyons and oceans), but it also quintessentially captures his huge spirit. And we add to this creation from time to time. It contains his tattoos, special stones, and feathers, lots of feathers. 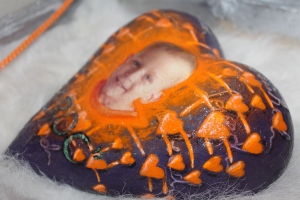 The box has been a reminder of the inspiration our son can be to those who haven’t met him, but we didn’t necessarily know that others were experiencing Caemon as muse in their own art. When a friend contacted me last summer with an urgent need to come for a quick visit, as she had something for us, another gift of our muse-child came to us. She presented us with a fantastic hand-made purple box with hearts, and inside, a ceramic sculpted heart with our son’s face in the center. You see, our friend’s friend is a brilliant sculptor. He makes countless glorious pieces, but just before he encountered Caemon’s story, he had begun making these amazing ceramic hearts, hearts of all kinds: hearts with butterflies emerging from them, hearts with text, each one with its own message. In Caemon’s story, he found inspiration for more. Caemon’s heart is a vibrant purple with a grid of hearts connected by other hearts and a photo of our boy in the center. This artist—Marcanthony L.–was taken with how many people Caemon’s short life—and death—had connected. On the back, he painted, “Healer of Hearts,” a line we wrote in his obituary, a line this artist had never read. For the next few months, as he showed and sold pieces from his “Having Heart” series, Marcanthony would donate a generous percentage of his sales to C is for Crocodile.  He not only created with our son as muse, but he gave in his honor. Our boy’s influence continues to spread.

And then there is the music written for our son. I have mentioned before our very talented musician friends, and one, a composer and cellist and all around brilliant soul, composed a cello piece for Caemon, for us. It is beautiful, intense, and it captures his whole life, from the waiting we did before he was even created to the mourning we have done in his absence. The middle of the piece is bright with bits of whimsy and joy, and it is bookended by longing. She wrote another piece, this one for guitar and with lyrics, which she shared with us on his fifth birthday last year—our son, immortalized in music, and oh how he would have loved it. I find this song playing in my head regularly, bringing ready tears, both for my boy and for the love of this friend who so exquisitely creates in his honor. (See the slideshow we paired with this lovely song at the bottom of the post.)

His inspiration has come to so many people, people who have made gorgeous

I’ll be honest and say I wish Caemon’s life as a muse had come from beating the odds and overcoming the worst of foes. I wish our son had emerged heroic, triumphant, alive from the horrible depths of his disease, that from his victory, we would have been all the more inspired, but that was not to be. The inspiration he offers comes from a boy with a heart too large to be contained in such a small body, a soul too wise to be bound to this earth, a life so full and bright and poignant that it was destined to become the stuff of not just legend but the source of beauty itself.

One thought on “Thirty Days of Caemon–Day Twenty: My Boy the Muse”