Today, we have another guest blogger, Ali, a friend and former colleague with a beautiful voice and a message I think many of you will identify with.

This morning I shuffled to the kitchen with my toddler straddling my hip.  I mechanically grabbed a bag of bagels and was about to drop one in the toaster when he grunted and pointed, indicating that he wanted to do it himself.  He clumsily wrestled each half in the slots, pushed down the lever until it clicked, and then peered eagerly inside the toaster to watch the coils heat up.  He waved his hand over the top and told me, “ah” (hot).  When I began to walk away, and he grunted more urgently, letting me know that he intended to watch the entire toasting process from start to finish.

Remembering that it was snack-sharing day at my daughter’s school, I rummaged through the pantry and pulled down the air popper from the top shelf.   My son’s eyes lit up as I carried it to the counter.  They said, “What is this marvelous thing you’ve been hiding in there?”  We carefully poured in the kernels, and he gazed through the plastic top as they began to swirl around and around.  I could feel my own excitement begin to swell despite myself, as I anticipated his reaction.  And then the first one popped and flung itself from the machine into the bowl.  “Pah!” he shouted, grinning like a maniac.  “Yes, pop!” I told him.  We watched the bowl fill, never taking our eyes off the magical appliance.

Like many of the mothers who deeply felt his loss, I didn’t know Caemon.  I met him once when he was a baby, long before his illness would draw me into a meaningful friendship with his mother.  Despite my not being a person in his life, I have felt that I know him through the stories and photographs that have both broken and lit up my heart.  It is the eccentricities of children that always enchant me far more than their cute faces and other more obvious perfections.  Caemon’s love of appliances, his personal relationship to inanimate objects, is one of my favorite things about this boy I never met.  I will never tire of hearing about the way he danced with, cradled, nursed to health, gave names to, and befriended appliances at home, and then later in the hospital.  I loved seeing the way his mothers embraced this charming, quirky passion he had and how well they understood the deeper needs he was communicating through these “relationships” he formed.  Undoubtedly, his initial love affair was sparked by the inborn curiosity that children arrive with, (and that we often lose, sadly, in adulthood) and the simple magic they find in the flipping switches and the setting of things motion.

This morning, as I watched my son’s eyes fixate on the red hot coils of the toaster and the whirring of the popcorn maker, I realized how actually “unquirky” Caemon’s  attraction to household appliances really was.  I found myself thinking, “Yes, Caemon and August!  There is magic and mystery and even a bit of power in these appliances.  There is wonder in the world.  There is wonder right in your kitchen pantry if you just pause long enough to let it in.”

The morning that Caemon was having a stranger’s healthy marrow put into his body, I woke up at 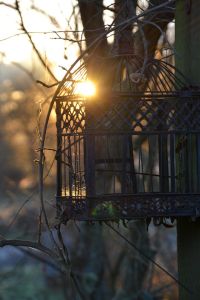 dawn and went out on the deck where I had an antique birdcage hanging.  The wisteria that grew along the railings had coiled itself around and through the birdcage in a way that was too beautiful to disrupt.  The deck faced the east where the sun was rising, and the beams of light began to shine through the cage and the cracks between the vines.  I took a few photos of it.  I thought about the profound nature of life and of dawn, and I felt blessed to be awake to see it.  I visualized Caemon’s body being flooded with light and health and comfort.  I promised myself to be mindful of each dawn, to pause for a moment when the sun rises and to remember that in life, the sunrise is really all that matters.  There is wonder in the world.  There is wonder right on your back deck if you just pause long enough to let it in.

When Caemon died, that birdcage out on the deck became very tied up with him in my mind.  Each morning it said, “Live!  Love your children! Don’t worry about trivial burdens!”  The last time I went to visit with his mothers, I got tingles when Jodi showed me the beautiful birdhouses she’s been making as she works through a grief that will never be done.  There are so many metaphors to be made from birds, birdhouses, birdcages, and it seems that there is a kind of magic in the way this imagery manifests, appears, reappears and overlaps in my life and in the spaces left by Caemon, a boy I didn’t know.

I don’t know how these things connect, and I have sat before this computer for days, trying to figure out how these pieces weave together.  There are so many ways that Caemon flutters and buzzes around my head from time to time, and they are momentary and fragmented and not neatly tied together.  He reminds me to hold my children tight, to never run from a grieving friend, to donate blood and gifts to children’s hospitals, and to stop and pause in reverence to toasters, birds and to the rising sun.   This morning he reminds me to really feel the weight of my son’s legs around my hip, to marvel at the electricity and heat running through our daily lives, and to take long moments to believe in the everyday magic of ordinary things.

3 thoughts on “Thirty Days of Caemon–Day Sixteen: The Symbols He Left”